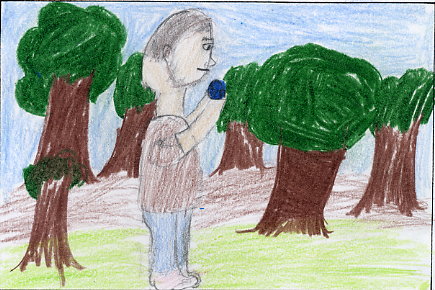 This book is about a boy named Eragon who is fifteen years old. His family lives in a farm outside a village named Carvahall in the land of Alagaesia ruled by the evil King/ Dragon Rider, King Galbatorix. When Eragon goes on a trip to hunt for dinner with his bow and dagger he finds a sapphire colored stone. He doesn't find any food so he goes into the butchery and buys meat for his family. When he goes home he asks his uncle what he should do with it. His uncle tells him to return it to the "Spine", a mountain range that is shaped like a spine and is a very magical place. That night the egg makes a lot of noise and all of a sudden, it cracked and a dragon came out of it. Eragon keeps it a secret from everyone but still manages to feed it. One day the dragon licks him and makes him the first dragon rider for over three centuries. He feeds the dragon and one day he goes to the local storyteller for help since the storyteller named Brom knows a lot about the fall of the riders when all the dragon riders were defeated by King Galbatorix and some stories of the dragon riders. So Brom tells him the names of all famous dragons and that's were Eragon got the name Saphira for his dragon. Two days later two characters dressed in black showed up in Carvahall, the village that Eragon lived in. They were called the Rázac and started asking around for the egg that Eragon found so they knew that it was a dragon egg. The Rázac that were asking around were the only two in the world and eventually found where Eragon and his family lived. They attacked Eragon's house and killed his uncle. Eragon wasn't there at the time. Eragon and the old storyteller named Brom went to kill the Ra'zac. On his way to kill the Rázac he meets new allies and makes new enemies. He learns swordsmanship and the ancient language and magic. He learns secrets of the past and the present. Brom and Eragon lose track of the Rázac and head for the Varden, a secret group that try to win freedom over King Galbatorix. On their way to the Varden, Brom and Eragon encounter new allies. Will they make it to the Varden or will they die trying?

I really liked this book because it's so exiting and has so many surprises and secrets. If you want to know them they are in the end of the book. I also like it because it doesn't take long to read even though it is 497 pages. It is like a vacuum and sucks you up and you can never get out until you finish the book. I also liked Eragon because Christopher Paolini is a very detailed writer and you could never not know what happening.

My favorite part was at the end of the book when there was a huge battle and Eragon kills the King of Shades, Durza. I liked that part because I thought it was funny because after Eragon killed Durza all the urgals went wild and started killing each other. The Battle under Farthen dur was a total outnumbered battle but the Varden still was able to beat them. My favorite characters are Arya, Saphira and Eragon because all of them are smart and very skilled at swordsmanship. I also like them because they would be the person I would like to be if I lived in that book. I think I am most like Arya because I have the same personality as her and I would help as much as I could if one person ruled the world that is evil. There is one major difference though, Arya is a girl and I am a boy. The book Eragon is part of a two book series soon to be three. Eragon, Eldest, and Empire. Also the movie Eragon is coming out.

Mark B.
is a student in
Mrs. Lonkhurst's and Ms. Hansen's 3rd and 4th Grade Classes