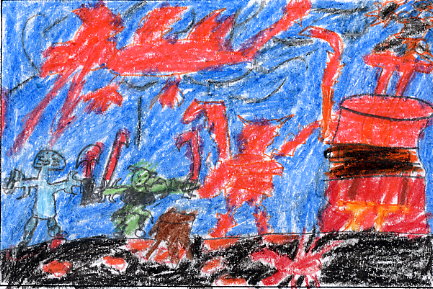 Six mythical beings called Toa and the population of The Island Of Mata Nui must go to another Island Of Metru Nui, to free their great god called The Great Spirit from an evil spell. When they arrive they find out that The Great Spirit is dying! The six heroes must go to the mysterious island of Voya Nui to find the ancient Mask Of Life. But puzzling traps, evil creatures,a mysterious entity, a powerful warlord and unknown enemies called the Piraka are trying to find the mask for themselves. Who will get the mask first? Will The Great Spirit die? Will the Toa succeed?

I liked this book because it had a lot of action and I like action. My favorite character was Zahktan because he was very mysterious and he has cool powers like shape-shifting and the ability to fly and to heal. I think that Toa Lewa reminds me of my sister because both of them are a little annoying and both are very, very energetic and fun loving. Toa Tahu also reminds me of my sister because both have a hard time controlling their anger and both enjoy running.

I recommend this book for 3rd - 5th grades because children in those grades usually like action. I also recommend this book for curious people (no matter what grade) because this book is almost impossible to put down because it just draws you in and in, especially if you are a fan of Bionicles. It is full of secrets. The characters are unique because they have realy cool powers and abilities and the setting is fascinating because it makes you feel as if you are there. I think that Greg Farshly writes the Bionicle series very well. I do hope that he writes some more Bionicle books.

Sacino I.
is a student in
Mrs. Lonkhurst and Ms. Hansen's Class