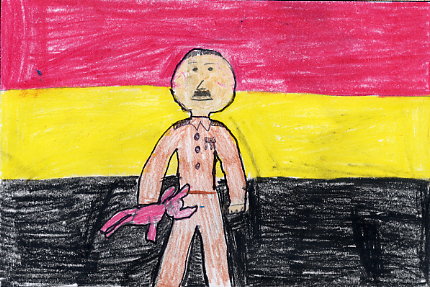 This book is about a Jewish girl named Anna and her family. Her father is a well-known writer in Berlin, Germany. They have a good life in Berlin but her father is afraid that the Nazis will come to power. So, he pretends to be sick and goes to find a safe place for his family out of Germany. They flee Germany on a train the day before the elections. They are now refugees in Switzerland. Anna and her brother, Max find it hard to live in another country. Their father doesn't find work because no one wants to hire a German writer. So, they move to Paris where their father can work for a newspaper. Both Anna and Max like living in Paris but pretty soon they will have to move again. Because the Nazis confiscate all of their belongings, Anna always imagines that Hitler is playing with her stuffed pink rabbit, which is the reason for the book title.

This is the best book I have ever read. It's a hard book to put down. It has a lot of historical facts in it, which is interesting to me because I am obsessed with history! It's a nail biter because you are concerned about what will happen to Anna and her family. It helped me to learn more about how refugees from Germany had to leave their homes because of the Nazis. It made me appreciate the fact that I am from a country that allows people to believe what they want to.

I recommend this book to third graders and up. It has small print and some tough words but you'll really like it if you are interested in history.

Daniel L.
is a student in
Mrs. Lonkhurst's and Ms. Hansen's 3rd and 4th Grade Classes