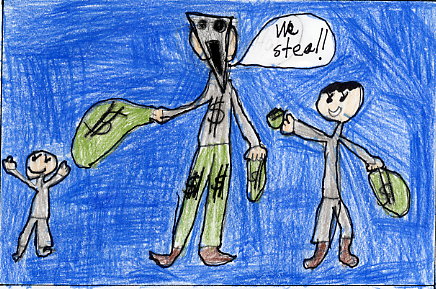 I think it is a great book with some funny characters. There's a girl called Hornet who always makes me laugh a little. It kind of reminds me of my friend James who used to run away. I think it is a very creative story that has a whole lot of imagination. It is the best book I ever read. It's so good I could read it instead of eat!

I recommend this book for 3rd grade and up. It has some challenging words and some parts that are hard to understand. It has 300+ pages. I love the book and absolutely think you should read it. It's a great book from head to toe and will never go bad like food!

Zachary P.
is a student in
Mrs. Lonkhurst's and Ms. Hansen's 3rd and 4th Grade Classes