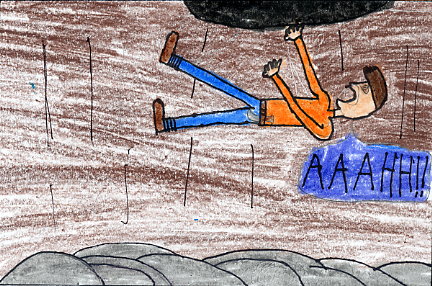 This book is about a boy named Jon who falls through a forgotten door! When he awakens he finds himself in a strange, unfamiliar place. He discovers that the big fall had given him a talking disability, but it also has given him magic powers! A family called the Beans found him and took care of him. They find out that he cannot remember anything. They teach him how to talk. One day, he actually remembers his name! But there is someone after him!!! Read the book and find out what happens to Jon.

This book is one of my favorite books. I liked it because I like books about magic. I also like books with adventure and this book has it. My favorite part was when I found out that Jon had developed magic powers. I also liked this book because it has a mysterious ending. Jon reminds me of myself because I get lost alot!

I recommend this book to third graders and up because it has challenging words and might be too long for younger children. If you like science fiction books this is the book for you.

Leo T.
is a student in
Mrs. Lonkhurst and Ms. Hansen's Class