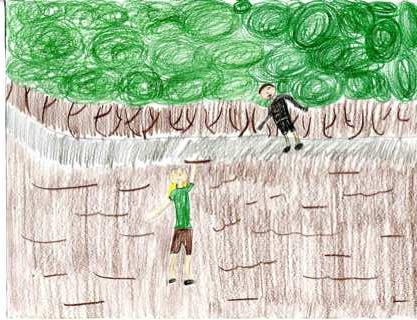 When a mysterious girl shows up at Jack and Ashley's front door, they are not sure if they could trust her or if they have to follow her everywhere and find out the real truth. Jack is very worried about what is going to happen at Mesa Verde and what Lucky is going to do. On vacation to Mesa Verde Jack and Ashley's mom is on a business trip to try to find out why a mysterious cougar makes very strange attacks on innocent people. Ashley is finding very mysterious things in Lucky's bag. Jack doesn't know who to believe, Lucky's lies or Ashley's mysterious findings of Lucky? When Lucky starts making mysterious phone calls and sneaking out, it makes Jack, Ashley and their parents very suspicious. What are they going to do? Will Jack and Ashley's mom trap the cougar? Why is Lucky sneaking out late at night and why is she making mysterious calls? Find out when you read Cliff-Hanger!

I loved this book a lot, and it is one of my favorite books I have ever read. I liked this book, because it left you hanging at the end of each chapter. With a mysterious girl, you don't know whether she is lying or not.

My favorite part is when Lucky sneaks out of their hotel to make a mysterious phone call to "Miria," (or is it really Miria?) At that part you didn't know who she is calling or why she is sneaking out at midnight.

The character that I found most interesting was Ashley. I found her most interesting, because she was always on the look out for any mysterious things that Lucky did. But even though Jack didn't believe her, and Lucky told her that she was wrong, she was right after all.

I would recommend this book to boys and girls who love mysteries and adventures because this book is full of them!