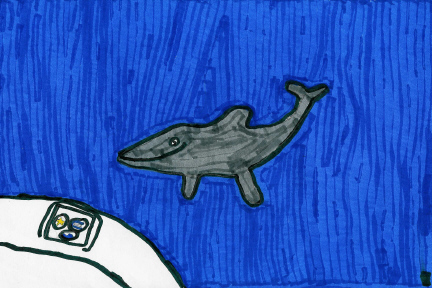 In this Magic Tree House book, Jack was awake thinking about a dream he'd had about the tree house. Annie came in and told Jack about her dream. They had the same dream. They went to the tallest tree in the woods and they saw the tree house. They saw Morgan le Fay and got in the tree house. Morgan said she sent them dreams and that they had to answer questions. Jack and Annie took the book and scroll that Morgan had and wished they could go to the place in the book. They landed on a beach. Morgan wasn't there. They read the scroll it said: Rough and gray as rock, I'm plain as plain can be. But hidden deep inside there's great beauty in me. What am I? Annie found a mini-sub and they went in it. It started to move. Soon they were under water. Jack found a computer and figured out that the computer steered it. They found two dolphins and Annie named them. The dolphins went away. Jack pressed a button and words showed up on the screen. It said that there was a crack. When they got to the surface, there was a big hole. They jumped out of it and swam for the shore. A shark chased after them. They got tired and the dolphins rescued them. Then they went back home.

This book is like Pirates Past Noon because they both take place in the ocean. They are both Magic Tree House books with Jack and Annie as the main characters.

This story reminds me of the time I saw a dolphin on vacation. I saw it swimming in the ocean.

I recommend this book because it is exciting. I think ages six to eleven would like this book.

Ethan B.
is a student in
Mrs. Finch's 2nd/3rd Grade Class