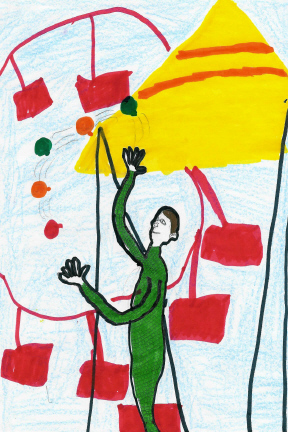 Eddie, Melody, Liza, and Howie are five Bailey School Kids. They are the main characters in this book. At the carnival there is a pretty weird grown-up at the water balloon juggling. He's also Eddie's math tutor. Melody and Howie think that he's a sea serpent, but Eddie disagrees. Eddie thinks he's just a math tutor. Can Eddie prove it?

Liza, Melody, and Howie try to prove it by going into the sea serpent's trailer. They see tons of tanks of fish and other sea creatures.

My favorite part of this book is when Eddie, Melody, Howie, and Liza saw someone who had an alligator-like back. They wonder what is was. They thought it was a big, big snake. Then, up popped Eddie's math tutor. It was exciting, but interesting.

Eddie is my favorite character. He's a funny character, but sometimes he's serious. Eddie is sometimes a mean character too. Eddie was mean when he threw water balloons at people.

In the book, I wondered what exciting part would come next. The authors make the exciting parts funny by describing the actions of the characters.

I recommend this book to kids in first grade up to fourth grade. If you like mystery books you'll like this book. If you like funny books, this is also the book for you.