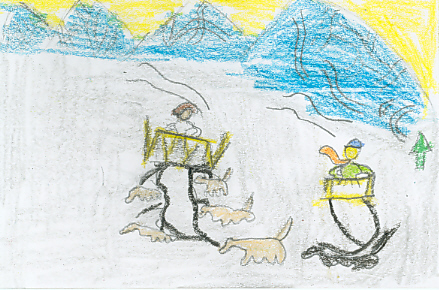 Stone Fox is about a boy named Little Willy who is ten years old. His grandfather will not get out of bed. Little Willy found out that his grandfather might die. He will not be ale to run their farm by himself. Then the tax collector tells him he needs to pay five hundred dollars to keep the farm, so Little Willy enters a dogsled race. If he wins, he could win enough money to save the farm. But, Little Willy will have to race against the great Stone Fox, who has never lost a race. Find out if Willy and his dog, Searchlight, win the race and if they get to keep the farm.

This was the best book I have ever read. I liked this book because the adventures that little Willy has interest me, because Willy is about the same age as I am. My favorite characters were Willy and his dog Searchlight. I felt sorry for Little Willy because his grandfather was sick and might die. My favorite part to read about was the dog sled race. That was the coolest part of the book because of what happens during the race. It was very exciting, and has a very surprising ending. I was happy and sad at the same time.

I recommend this book to third and fourth graders and people who like to read about adventures. I also think dog lovers would love this book.