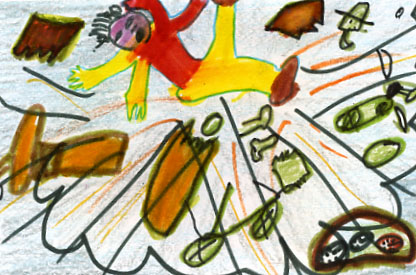 We like the illustrations. When things are fortunate, the pages are colorful. When things are unfortunate, the pages are black and white. The clock and the sun have smiles. When Ned is running, the illustration shows his hair blowing in the wind. For Alex, the scariest part was when the motor exploded. He doesn?t like to go on airplanes because he thinks the plane might crash, but he has a good time when he goes by plane to see his grandma in Chicago. Ned is brave, strong, and fortunate. He swims faster than sharks and runs faster than tigers.

We recommend this book for people who like random events, because there?s a series of them in this story. It?s a good book to read aloud.