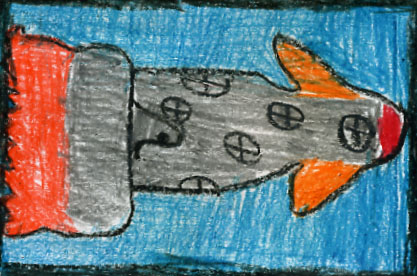 Sandy's Rocket was an "Out Of This World" book to read! In the beginning, Sponge Bob goes to Sandy's house sees her rocket. He asks her if he can ride to the moon in it. Sandy said, "Yes." Sponge Bob and his best friend Patrick decided it was a good idea to spray the windows with alien repellent. Patrick plays with the gadgets and hits the "Launch" button by mistake. The rocket takes off and goes back down in the water. But Sponge Bob and Patrick still thought it was the moon. They shoot all the people including Sandy and Patrick. Sponge Bob takes off to Bikini Bottom. Sponge Bob sees the earth. "Uh Oh" thought Sponge Bob. Will Sponge Bob get home from the moon? Will Sandy ever fix her rocket?

I recommend this book to people who are totally interested in cartoons! One reason is because the characters are cartoon characters. They do crazy and funny things which are different from what people do. The people in the story are very famous and actually on TV. If you like cartoons, READ MY BOOK!

J.W.
is a student in
Mrs. Zanga's 3rd Grade Class