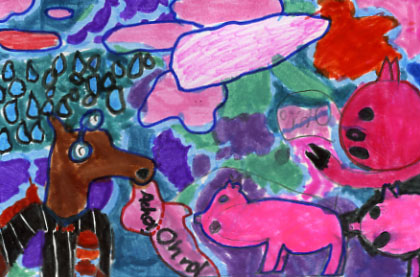 The wolf is looking for a cup of sugar all through this story. He wants to make a cake for his grandma?s birthday. The three little pigs have built the same houses as usual. When the wolf is trying to borrow sugar from the first two pigs, he accidentally kills them so he eats them! The third little pig is smart and rude, so he doesn?t get eaten.

Our favorite character is the wolf because he tells the story in a very hilarious way. A favorite part is when the wolf says, ?When somebody talks about my granny like that, I get a little crazy?. It is extremely humorous when the wolf says, ?. . . and the whole time, I was huffing and puffing and making a real scene.? It?s funny when he drops the cup. Lauren B. likes it when the second little pig tells the wolf, ?Go away wolf, you can?t come in. I?m shaving the hairs on my chinny chin chin.? The illustrations have a lot of detail. They look as if the illustrator took five hours on each one! She used dark and light colors which make them look unique.

This is a well-known fairy tale, but the wolf is telling the story. We will leave the end as a surprise, but it is our favorite part!