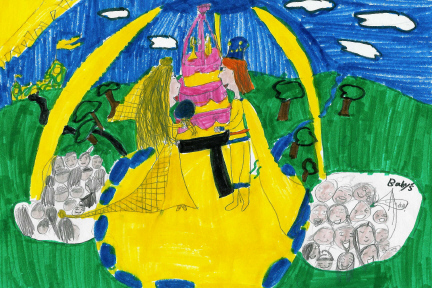 The book Princess Furball is about a girl whose father said that she had to marry a giant. She ran away and was found by a prince! He made her work in the kitchen of his castle. There were three balls, the ones you dance at. She went to all three of them in disguise. The day after the last ball, she had forgotten to change into her kitchen clothes. All she put on top of her dress was her coat made of a million furs and a cloth over her hair. She had not buttoned up right, so the prince took off her coat when she was serving soup. He asked her to marry him and she said yes. The lived happily ever after.

I liked the book because it was life-like. It sounded like the book was real because it convinced you that it was real. It is my favorite book ever.

I liked the princess because she was smart and witty. I also like the prince for the same reason. I think they were a good match.

I liked the illustrations because they are life-like in a nice way. They sort of have movement in them. If you read it I think you would agree.

I would recommend this book because it is a good bedtime story. I like it very much. Maybe you will too. If you are a parent someday maybe you should read it to your kids if you have any. I think this is for kindergarten to 4th graders. Even my mom likes it. She retells the story to my sister and me on vacations.

Maggie M.
is a student in
Ms. Finch's Class