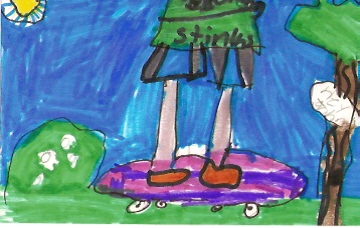 This book is about a girl named Joanie. She went to a new school. When her new teacher Mrs. Astin called the roll, they wrote Joanie's wrong so instead of writing "Joanie" they wrote "John". She wanted to be a boy, so without talking to her parents she went with it. So from that day forward she had boys for friends. The first friend she had was Casey because he was really nice to Joanie. Will Joanie keep on liking being a boy? I really like this book because it talks about girls having the easy life - which is not true! It also talks about how sometimes friends can be mean - which is true. Another reason I like this book is because I agree with a lot of things in the book, like you don't always have to do what your friends want to do, and you need to stand up for people when other people pick on them because it's the right thing to do. I would recommend this book to boys because it talks about don't trust everyone -true! Every age of boys should read this book. I think they would especially like the end of the book because the boys finally find out from Joanie what the truth is.