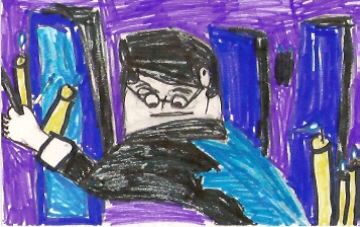 This book is about a boy named Harry Potter & a magical school called Hogwarts Witchcraft & Wizardry. Harry is having nightmares of something in him by He-Who-Must-Not-Be-Named (Lord Voldemort ). Harry's friend's dad Mr. Weasley is part of his dream. In fact, in his dream Harry hurts Mr. Weasley. Harry Potter is in danger this year. The dream seems so real- will the dream come true? I like this book because it has thirty-eight chapters in it. My favorite character is Lord Voldemort. I like the part when Harry, & Professor Dumbledore fight Bellatrix & Voldemort. I also like this book because it's one of the best Harry Potter books. Each year of Hogwarts is different. The book made me want to read five chapters a day. I recommend this book to my six-year-old cousins named Jacob and Jarod. I also recommend this book to my two-year-old sister because she always wants to watch Harry Potter all the time. I think all kids over first grade would like this book. I think boys and girls would like the dream.

Hunter B.
is a student in
Mrs. G.'s 2nd Grade Class