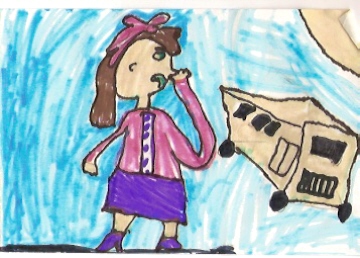 Junie B. Jones is so funny!!! One time she hid in her teacher's art closet. After everybody left she came out, and she explored the school. She went into the nurse's office and started playing with things she shouldn't have been playing with. That's when the trouble started! She got in big trouble!! Things got better when she went home and she made a new friend on the bus named Grace. I liked this book because it was funny. My favorite part was when Junie B. Jones learned her lesson so she wouldn't do it again. My favorite character is Junie B. because she is so silly! The illustrations were animated but they were still good. It's like a bunch of other books in this series because it's like something that wouldn't happen in real life. It made me wonder about how it would be like in school by myself. I recommend this book to everybody in elementary school. I think they would like the book Junie B. Jones and the Stupid Smelly Bus because Junie B. would make them laugh a lot. I think they would especially like the part where she doesn't want to go to school on the bus, but she has to. Her mom said that it would be fun but it was not fun. It kept on getting hotter and hotter but she had to stay on bus. When she got to school a lot of people happened to be in her class.