Voices in the Park

Voices in the Park 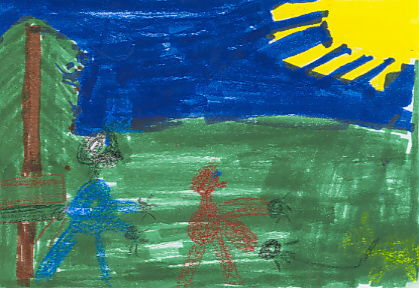 The book, Voices in the Park, is a picture book about four different people and their point of view about a visit to the park. There is a mean mom and her son, Charles, and a sad father and his daughter, Smudge. Each character has a very different viewpoint of what actually takes place. The mom is very angry. She doesn't want Charles to play, and she doesn't want her dog to play with the other pesky dog. She is kind of a snob. The pictures change with each character and their point of view. The same park changes from colorful and cheerful to dark and scary, depending on which character is telling the story. In this book, the pictures tell more of the story than the characters do. Read this book to find out what each character thinks of their trip to the park.

I liked this book because I like the way the background in the pictures copies the way the people are feeling. This book is unusual because the author made the illustrations so important to the story. In order to really understand the book, you have to look closely at all the illustrations.

I think the Anthony Browne is a great artist and his work is very different from others I've seen. My favorite character in the book book is the mom. She is supposed to be a person, but she is drawn as a gorilla in an army hat. She is strict, and when she yells, she has a huge mouth. The mom in the book reminds me of my cousin because she is really crabby. She is really bossy, and acts like a queen.

I would recommend this book to kids of all ages - even grownup kids, because everyone has a different point of view in the story and that makes it interesting. You will love this book.