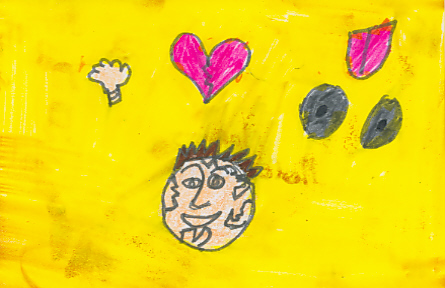 The book I'm reviewing is More Parts by Tedd Arnold. This picture book is about a little boy who hears a bunch of crazy stuff. His teacher says that he needs to stretch his arms and legs before playing. He doesn't think he needs stretching. His neighbor tells him a joke and says it will "crack him up", so he thinks he will crack up and fall apart. Every time anyone says something about his body, he thinks it will really happen. He doesn't understand that they are using a figure of speech. By the end of the book he is really upset about falling apart. His parents try to make him feel better.

I like this book because it made me laugh like crazy. My favorite character is the little boy telling the story, because it's funny that he doesn't understand what people are saying. He tries to protect himself with glue, gloves, and all kinds of things. He reminds me of my cousin because my cousin always believes what I say, and he gets scared too. My favorite part is when his dad tells him to "give him a hand". He gets so scared that his dad will take one of his hands that he tries to glue himself together.

I recommend this book to people who like funny picture books. It is short and easy to read, so even first graders would be able to read it.