Pup at the Palace

Pup at the Palace 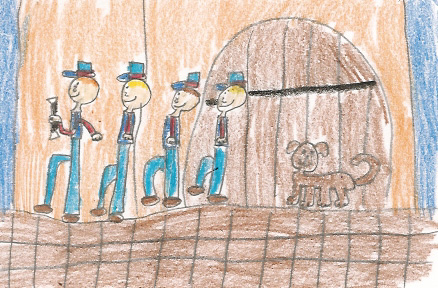 Pup at the Palace is a fantastic book! Mandy and James meet a girl named Casey in a hotel in London. Casey asks if Mandy, James, and Mandy's parents want to eat with her family. Mandy says yes, so they eat together. They become good friends. The next day Casey's family and Mandy's family come to the palace to see the guards change. A hotdog stand comes and Mandy sees a homeless dog by it. James came along too, and he had a dog biscuit in his pocket. They bribed the dog to come over to them and eat the biscuit. They tried to catch the dog, but he ran away. Will they catch the pup? Will they find a home for it? Read and find out.

Mandy reminds me of myself. She reminds me of myself because she's adventurous. She goes on a lot of adventures and so do I. Most of the time she learns things on her adventures. She gets scared a lot and boy you're talking about a girl who is afraid of an ant. Me! She also cares for animals. She loves animals so much, but I probably love them more than her. Mandy wants to be a vet, and I want to be a vet too! I try to save animals and so does she. Another reason she reminds me of myself is because she's smart. She knows a lot about animals, and so do I! I'm clever, and she is too! She is fantastic at making plans, and I'm great at making plans. Mandy and I have a lot in common!

I recommend this book to puppy lovers, people who like sad stories, and for kids who lost their parents. This book is also good for people who want to be a vet when they grow up. Don't watch T.V, buy this book!!!

CL
is a student in
Ms. Forte's 3rd Grade Class