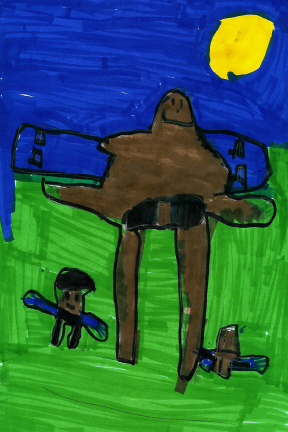 This story is about two boys named George and Harold who get in a ton of trouble for playing pranks at school. So their principal hated them. One day they ruined the school football match. They filled the football with helium and filled the cheerleaders pompoms with pepper!!! So the principal made them do a lot of work to make up for the mess.

So George and Harold bought a hypnotizing ring and hypnotized the principal. He turned into Captain Underpants. Then he jumped out the window to fight crime! Harold and George followed Captain Underpants. Before they went out, they took some supplies too.

My favorite part in the book was when George and Harold ruined the football game and got in a ton of trouble. It is a good part because it is hilarious. The funniest part was when they filled the football with helium.

I recommend this book to kids who like funny books because it is full of hilarious jokes. I think kids in the fourth grade and below would like this book because it makes you laugh.