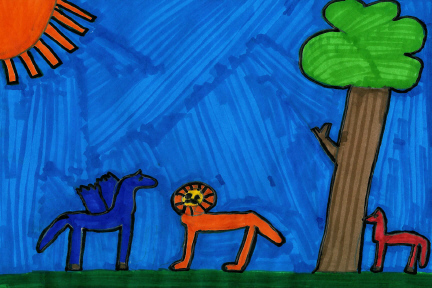 I read the book The Magician's Nephew. There are three characters named Polly, Digory, and Digory's Uncle Andrew. Polly is a girl with short blond hair. Digory is a boy with brown hair, who is Polly's neighbor. Polly and Digory become friends.

They went to each other's houses too. But one day, it was raining and Polly invited Digory over. While Digory was there, Polly led him into a long hallway. Polly didn't know if the hallway stopped or not. Polly was so busy thinking, she didn't even realize that suddenly they came to a door. Digory opened the door.

When they were in the room, they saw Digory's Uncle Andrew who is a magician. Digory introduced Polly to Uncle Andrew. After a while, Uncle Andrew asked Polly if she wanted a ring. Polly said that she wanted a green ring. Uncle Andrew wanted her to take a green one. Digory found out that his uncle was doing something bad, but it was too late and Polly had vanished.

I liked the book because it has a lot of details. I like books with animals for characters.

There is a lion named Aslan in this story. My favorite part is when Aslan makes the world of Narnia have dwarves, fawns, and other creatures. I liked this part because there were many different animals.

Aslan is my favorite character because he is the king of Narnia. He is really brave and smart. I also really like lions.

I recommend this book to readers who like animals and magic. Kids in second grade and up would like this book.