Magic School Bus: Expedition Down Under

Magic School Bus: Expedition Down Under 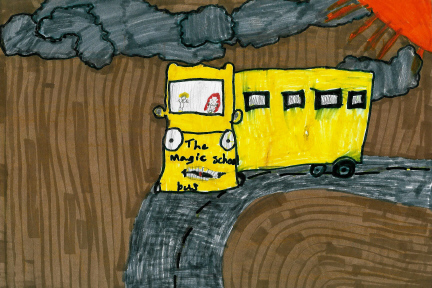 I read the book Expedition Down Under. It was about kids with a teacher named Miss Frizzle who has a magic, wacky school bus. They take a lot of field trips.

In this book they go to Australia. When they were there, they had a tour guide named Tiki. They see a lot of wild animals like kangaroos, wombats, a Tasmanian devil, a platypus, a sugar glider, a koala, and a crocodile. A lesson to be learned in this book is to never try to outrun a dingo.

In this book a girl named Wanda took a pogo stick from the bus and bounced away with a mob of kangaroos. All of the other kids thought that she would get hurt. They tried to keep up with the mob of kangaroos in the Magic School Bus.

I liked this book because I like pogo sticks, kangaroos, and magic. I also like when they chase after Wanda. I like that the Magic School Bus can transform into different things. In this book, the bus turns into a jet.

My favorite character was Tiki because she wrestled a kangaroo. I also like Carlos who is also in Miss Frizzle's class. I like Carlos because he is brave.

I would recommend this book to first to sixth graders because this is a pretty easy and fun book. Kids who like fiction stories would like this book.