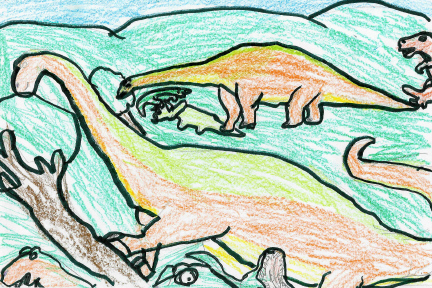 This book is a non-fiction book about five dinosaurs. The author describes the dinosaurs and explains the facts about them very well.

The first dinosaur is the Apatosaurus. Apatosaurus was huge. It swallowed its food whole. The second dinosaur, the Stegosaurus, ate low to the ground plants like ferns. The third dinosaur, Velociraptor, is one of the most deadly dinosaurs. One slash of its claw would kill you. The fourth dinosaur is the Triceratops. "Tri" means "three". "Triceratops" means "three horned face". Now, the final dinosaur, the T-Rex, is the fiercest dinosaur. He has 60 teeth and he has a keen sense of smell.

My favorite illustration is of the Apatosauruses eating. They have giant teeth. It is cool becasue they are massive dinosaurs.

All of the pictures, writing, and the illustrator's ideas are neat. The book reminds me of Jurassic Park III because they find Apatosauruses grazing and Velociraptors eating Triceratops like in this book.

I believe that kids from six to twelve years old would like to read this book. My brother can read this book and he's six. I would advise my family and friends to read it, but I wouldn't recommend it to my little sister. It is not a good book for kids one to four years old.