The School Bus Driver from the Black Lagoon

The School Bus Driver from the Black Lagoon 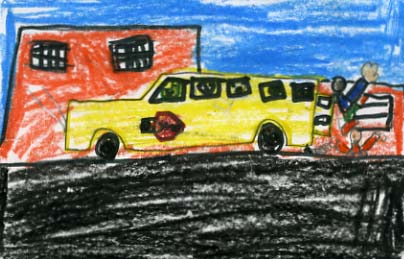 This book is about an 8 year old boy waiting at the bus stop and he heard the bus driver was new. He is thinking that the bus driver is going to be a monster. His friends told him some weird things about the bus driver. His imagination goes wild! He begins to think that the school bus driver is a dinosaur and then he thinks that the driver?s dog does all of the driving. He heard that the driver thinks he?s a NASCAR driver and races past all the other cars and buses and sometimes practices for the Monster Truck Show when he has kids on the bus! Worst of all when the bus gets a flat tire or breaks down the driver makes the kids do all the work. Then, the school bus pulled right in front of him and the door opened and it was a regular person. At the end, he found out that the bus driver was not a real monster. The funniest part was when the little boy thought the bus driver would not ask for directions until he was lost in the boondocks! The illustrations were really cool! The funniest one was he thought that the bus driver was a ghost and drove the Magic Ghoul Bus! I enjoyed this book because it was a very funny book. I would recommend this book because it teaches you not to listen to other kid?s stories or your imagination can go CRAZY!