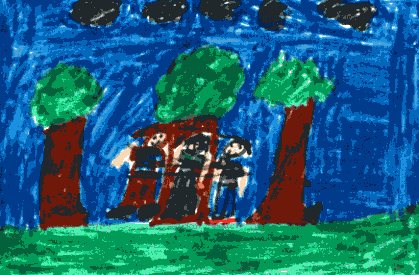 The three boys; Sam, Joe, and Fred were at Joe?s house watching TV. Fred wanted to go into the past. He opened the book and they were in the time of the wild west. When they got there, Fred tried to find "The Book" but he couldn?t because there was a stampede. The boys got scared and tried to make a spell that could freeze time. Then some red smoke came up. They thought they did it but they saw someone coming. They thought it was the cows that were coming but they weren?t. Fred, Sam, and Joe were trying to be cowboys, but they didn?t have any horses. Some guy gave them three ponies, but they were hard to control. They fell off all the time. Then the boys fell in a river. They were captured by indians and the indians tried to kill them, but the Sam talked them into waiting. The boys got tied to a tree and the chief tried to save them. Then the cowboys came and started to fight the indians. Then, they finally found "The Book" and they went back to Joe?s house.

This is a cool book! I liked it because it was very funny. When they got to the western times, they had trouble all the time. This book is like another book I read, I also read ?The Knights of the Kitchen Table?, and the two books are alike because they were both funny, and the three boys traveled back in time in both books. I felt happy when I read this book because a lot happened and it wasn?t boring.

I recommend this book because it is a great book. I think that all kinds of people would like to read this. I think second graders could read it by themselves.