The Titantic Lost and Found

The Titantic Lost and Found 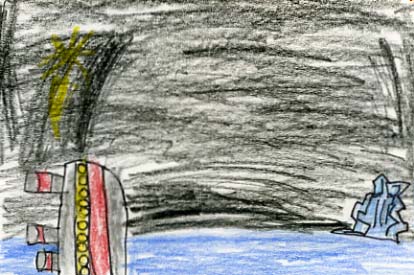 This book is about the Titanic, ? The Wondership.? It was like a floating palace because there were restaurants, a post office and a gym with a toy camel to ride. It takes place in the Atlantic Ocean. It hit the iceberg off the coast of Canada. In the beginning there was a celebration for the sailing of the Titanic. There was a band playing with big crowds. Then, it sailed from England to Ireland and then America but hit an iceberg before it hit America. The lookout didn?t see the iceberg because it was dark. At the end the Titanic sank and only half of the people were saved because there weren?t enough lifeboats.

I enjoyed the book because it was history and I love learning about history and real things. I liked the illustrations because of the picture of the split Titanic and you could see the inside of the ship. I?ve read another Titanic books, but I like this one better because the author made it easy to read.

I would recommend to other second graders because this book was interesting and a true story.