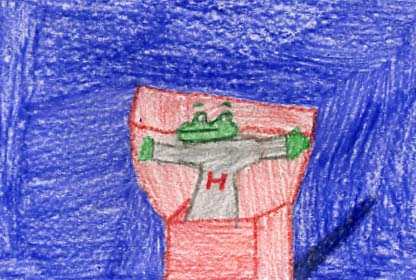 This book is about Stanley, Arthur, Mr. and Mrs. Lambchop, Ralph, Howard, the bank robbers, and Teddy Talker.I t takes place in Stanley?s house, at the park, at the TV show, the bank, and Dr. Dan?s office. In the beginning, Stanley goes downstairs and gets an apple and goes back upstairs to his room and sits by the window. There was a thunder and lightning storm. Then Stanley found raisins on the floor in his room and ate four of them. Then one morning, Stanley was invisible! Stanley goes to see Dr. Dan, but he could not help Stanley. At the end, Arthur makes a storm by running the shower for the rain. Mr. Lambhchop turns a flashlight on and off for lightning. Mrs. Lambchop bangs a pot with a spoon for thunder. After the storm, Stanley was back to normal.

I enjoyed this book because it was funny that a boy named Stanley became invisible and that Stanley?s last name is Lambchop. My favorite part was when Stanley made a flying frog. It made me smile. Something funny always happens to Stanley in his books; in the first one he becomes flat.