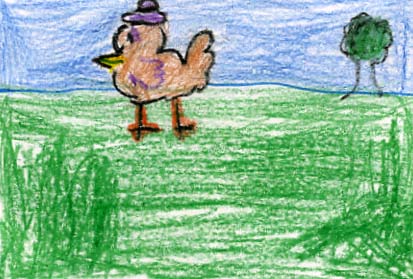 This book is about Bear and Bird. What happens in the beginning is Bear wants to learn how to fly and Bird wants to be bigger. Bear stands on a rock and jumps. He makes a kite and tries again. At the end, Bear paints himself on the kite so he flies. Bird is on a pumpkin, so he?s bigger.

I think this book is great. I liked Bird and Bear because they were sweet. My favorite part was when Bird was on a pumpkin because it was a good idea. I would have done something like that. The pictures really helped the story, the colors were very bold.