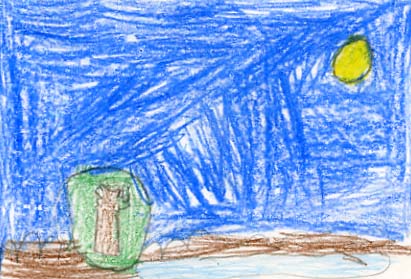 What happens in the beginning is Bear decided to give the moon a birthday present. Then, Bear bought the moon a hat but it blew away. At the end, Bear tells the moon that he lost the hat, then the moon tells the bear that he still loves him.

I think this book was good. My favorite part was when he gave the hat to the moon because it was thoughtful. I liked the pictures because they were very colorful. I like the bear because I would love to be his friend.

I would recommend this book to all first graders. They will be surprised that a bear can talk to a moon.