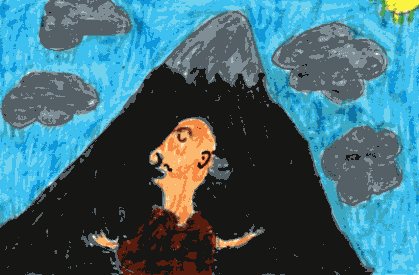 Sam Samuri is about three boys named Sam, Joe, and Fred. Joe's uncle was a magician and gave him a special book that could take them anywhere in the world. They had to write a report about Haiku, (Hokku in Japan) so they went to Japan and met a samurai named Honda; he was fighting with a samurai that wore all red and black. Then the three boys met their great-granddaughters who inherited the magic book and sent them back in the past. The boys wrote a story about him but that was the wrong project to do.

My favorite part is when Fred, Joe, and Sam met their great-granddaughters. It would be kind of cool to be able to see what your great-grandchildren are like because that usually doesn't happen. I liked Freddi, Jo, and Samm; they were the boys' great-granddaughters. They helped to keep them out of trouble. This story was like Knights of the Kitchen Table because the same characters have adventures in both stories.

It reminds me of the story The Nights of the Kitchen Table. I think the book was great because it was funny and I love very funny books. I think ages 9 to 12 would like to read this book.

Tia A.
is a student in
Mrs. Weidemann's 3rd Grade Class