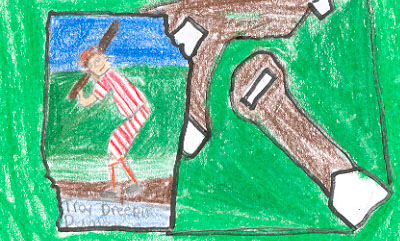 In our book Pigsty, Wendell's mom tells Wendell to clean his room. His mom says it's so messy that it is going to turn into a pigsty. So he went up to his room and there was a pig in it. Wendell said, "pardon me" and then he shoved some more stuff under his bed. The pig didn't seem to care. His mother came to inspect and she threw her hands in the air. She said, " Ok Wendell, live in a pigsty if you want to!" Wendell could not believe his good luck. "Now I can live however I want", he thought. He did not even care when another pig showed up in his room on Tuesday.

Our favorite part of the book was when they played games until dark and left them all over the floor. Then they had pillow fights and jumped on the bed. This sounds like a lot of fun.

The best part of the book was when one pig sat on a basketball and another pig ate some cards. The pigs were our favorite characters in this book because they were so messy and funny.

This is the coolest book and everyone should read it, especially if you are messy!

Kaden & Billy
is a student in
Mrs. B.'s and Mrs. Beatrice's Class