Snoopy: Flying Ace to the Rescue

Snoopy: Flying Ace to the Rescue

Illustrated by Peter and Nick LoBianco 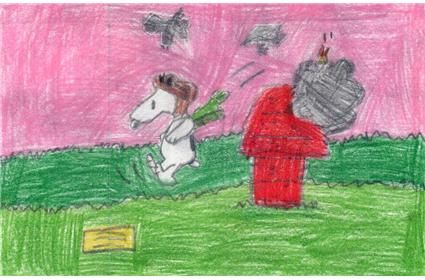 This story is about a dog named Snoopy. Snoopy thought he was a World War I flying ace. When Charlie Brown (Snoopy's owner) and Lucy were walking to school, Snoopy was running down the runway. Then, Snoopy said to his crew, "Good morning chaps!" It was time for him to fight the Red Baron! But a snowball hit him right in the head. Then, his doghouse caught on fire. Snoopy jumped to the right and plop...landed in his dog dish! Snoopy was trapped in no man's land and he was hurt. He needed a first-aid station fast. If you want to know the end of this story then try to find the book and read it.

It reminds me of my dog Chester because the dog in the book can do tricks too! But not that many tricks. I liked Charlie Brown (Snoopy's owner) and Snoopy (Charlie Brown's pet dog) because they were the main characters of the story and they were funny. My favorite part was when Snoopy jumped off of his doghouse and into his dog dish because his doghouse was on fire!

I recommend this book because it was funny when Snoopy jumped in his dog dish.