The Three Little Wolves and the Big Bad Pig

The Three Little Wolves and the Big Bad Pig 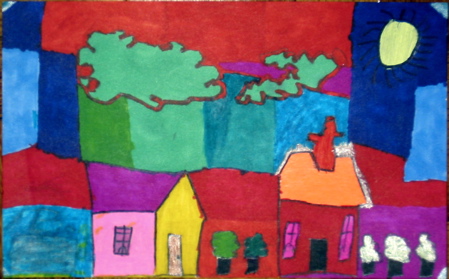 Three wolves built four homes to protect themselves from the big bad pig. But the pig wasn?t called big and bad for nothing! He went and fetched his sledgehammer and he knocked the house down. ?We shall build an even stronger house,? they said, because they were very determined. Just then, they saw a truck coming along the road carrying barbed wire, iron bars, armor plates, and some heavy metal padlocks. ?Please will you give us some of your barbed wire, iron bars, and armor plates and some heavy metal padlocks?? they said to the rhino who was driving the truck. ?Sure? said the rhinoceros, and he gave them.

I like The Three Little Wolves and the Big Bad Pig because I like the explosions. I also like the little wolves when they build the four houses. I really like when the big bad pig takes the sledgehammer and he knocks the house made out of bricks down. The illustrator makes the games look like real games and not made-up games because he adds shadows and a lot of action. My favorite character is the little white wolf because he looks cute and fluffy like a teddy bear.

I would recommend this book to people who like funny and happy ending books and it has cool effects. The pig knocks down one house with a pneumatic drill. In the middle of the story the wolves have a tennis court in their house. The wolves have a mud bath near the end. Read this book please!

Alex G.
is a student in
Lisa's 2nd Grade Class