Voyage on the Great Titanic

Voyage on the Great Titanic 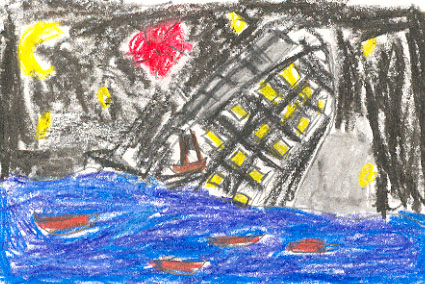 Has anything happened to you that changed your life forever? Voyage on the Great Titanic, is the diary of an orphan girl named Margaret who worked as someone's maid in order to get across the ocean to America. When the Titanic was almost there what was thought to be the ?unsinkable ship? sank. I think it is really neat because this book is Margaret's diary. She was a good writer and used a lot of detail. Reading this book helped me learn more about the Titanic. This book has taught me a lot about how strong friendship can be. I think Voyage on the Great Titanic was a great book. It has a lot of detail and is fun to read because it is coming from the view of someone who was on the Titanic.

I like the part at the end when Margaret Brady sits down on a park bench and her brother, William who she traveled over to America for, comes and sits next to her. I like this because it is a happy ending.

I really liked the characters in this book. I liked Margaret because she was a girl who lived in an orphan home and then was riding first class on the Titanic. She is so amazed by the luxuries she gets. I like her because she doesn't take advantage of the things she gets and she is nice to everyone.

This book is part of the Dear America series. All of these books are diaries. Most of them are diaries of people who were at important events in history. Some were just some people who lived in olden times. These are about the hardships in young America.