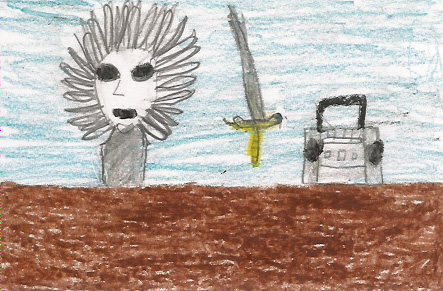 The Haunted Hotel was the scariest book ever! In the beginning of the story, Dink was reading the newspaper and saw that there's a ghost in Green Lawn. So, Dink, Josh, and Ruth Rose went to the Shangri-la Hotel to see if the ghost was there. They asked Mr. Linkletter if anyone in the hotel saw it and he said, "Yes!" The kids talked on the phone to Mr. Spivet about the ghost. He told them to sleep in the hotel for a couple of days. When it got too serious, the kids asked their parents to stay with them in the hotel for a couple of days. When it got dark, the kids looked for the ghost. Then they heard things crashing, and they ran to thier hotel room. The sad part was the hotel had to close because everyone was scared to stay there. Everyone was terrified. Will they find out who the ghost is? Will the hotel be closed for good?

My favorite part of the book was when the kids had to sleep in the hotel. They had to sleep in the hotel because people wanted the kids to find out who the ghost was. Well, to find out who the ghost was, they had to ask people if they saw the ghost and everyone said "Yes!" What I thought was scary was that the kids saw the ghost. The ghost said the kids' names really weird, and things crashed and broke like a pot. I thought it was exciting that the kids found white hair in Ruth Rose`s hair, and she took it out of her hair. Another exciting thing was that the ghost flies in the air. My favorite part was really interesting, scary, and exciting!

Josh is an interesting character in the book. Josh is interesting because he is scared of everything, and he wants to go somewhere else when the investigation goes too far. What's weird about Josh is that he is really selfish and does not share. He wouldn't share the newspaper with Dink and Ruth Rose when they wanted to see it. Another reason Josh is weird is that he really does not act like a detective, but he is. What's funny about Josh is that he sometimes does silly things like when he screams like a girl. That made me laugh. He also trips a lot on purpose to get attention. Josh is the most interesting character in this book!

I enjoyed reading this book! I like it because there were great settings, characters, problems, and solutions. What I liked the most was that it was interesting, a great mystery, and had really good pictures. It's really fantastic because it has an extraordinary author that has phenomenal ideas. What got me really interested was the title and the summary on the back of the book. I loved the investigation. I terribly enjoyed this book!

I recommend this book to kids who like mysteries, scary books, and BIG adventures! Kids who like scary books will like it because it has an extraordinary mystery and very interesting clues!

AM
is a student in
Ms. Forte's 3rd Grade Class