Don't Sit on My Lunch

Don't Sit on My Lunch 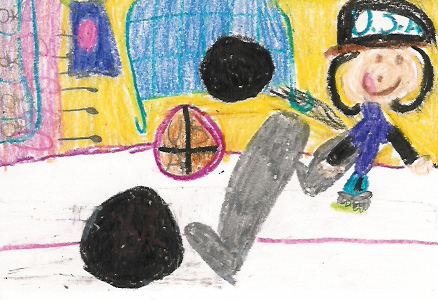 Don't Sit on My Lunch was cool. One day Freddy and his friends were going to lunch. In the cafeteria, Max (who is a bully) pushed Freddy off the bench. Then Max asked Jessie where she got her jersey? She said she played hockey, and it was her team's jersey. There was one spot left, and she thought maybe Freddy should try out. Freddy thought it was a good idea, but Max wanted to try out, too. That night at dinner, Freddy asked his mom or dad if he could tryout, and they said yes. After dinner, Jessie called Freddy. She told him to go to her house after school the next day. The next day at Jessie's house, Jessie was teaching Freddy how to play hockey. Then it was time to go home. Jessie said to come back tomorrow. So, that night at dinner Freddy couldn't wait to watch his favorite show on T.V.. The next day Freddy asked Jessie what they were going to do today. She said she would teach him how to shoot a goal. Then she would teach him a trick she made up. He couldn't wait, but first he had to get his gear on. Jessie was excited, too. She couldn't wait to teach again. The next day it was tryouts and Freddy couldn't wait. Then he ran out of his room. Knock, knock! His sister let him in the bathroom. I can't find my lucky underwear. Then he found them and Freddy's sister gave him a lucky seashell. The tryouts were hard, but when the coach spoke he said someone on the team quit. Now there were 2 spots open. I wonder which two people will make it? Will they like each other?

Freddy reminds me of myself. The main reason why is we don't like bullies. We like to wear jerseys and ride bikes. We also like hockey. What is really cool is that my brother is nice to me and Freddy's sister is nice to him sometimes. We don't really like sharks too much. We are really alike.

My favorite part of the book was when the kids had tryouts for hockey. It was all up to the coach. I couldn't wait to see what would happen. There were only two spots. I wondered who would make it and who wouldn't. It was very cool. Freddy loves hockey so I hopped he'd get picked for the team. Read this book and find out what your favorite part is going to be.

I recommend this book to anyone who wants to enjoy a story about hockey. It's like the movie Miracle! This book was funny, entertaining and cool! Read this book. I had a blast reading this book, and so will you.

GT
is a student in
Ms. Forte's 3rd Grade Class