Bully for You, Teddy Roosevelt

Bully for You, Teddy Roosevelt 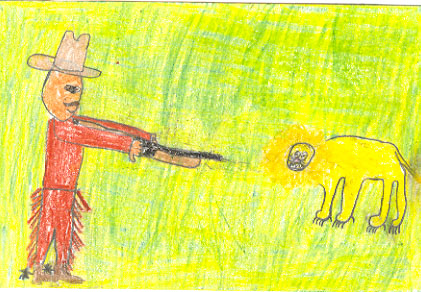 When I read this book, I had a variety of feelings. One feeling that I had was sorrow. In the book there were quite a few deaths. Some of those deaths were close to Teddy, some not so close. Another feeling that I had while reading the book was happiness. Teddy was elected governor of New York and president of the United States. Teddy changed in a few ways. Teddy started out with bad asthma as a child, but in his early teenage life he started working on regaining his strength. He became weak again after his Brazilian trip. Before Teddy?s first wife died, he thought about her often, but when she died Teddy never talked about her or really thought about her again.

I had a few favorite parts of the book. Two of them were when Teddy showed so much determination. When he was in his early 20?s, he went to a campsite in South Dakota to hunt buffalo. He chased one down for four days in the pouring down rain. Teddy also wanted to support his country by fighting in the war against Cuba. He formed a group called the Rough Riders and led them during the war. I have two other favorite parts. One was when Quentin (Teddy?s son) brought the Roosevelt?s pet horse up the elevator to the second floor of the White House to see another of the Roosevelt brothers who was sick in bed. My other favorite part is when Quentin secretly invited his friends over to the White House, and they put spitballs on the paintings of the presidents that were elected before Teddy.

I really liked this book. It is full of information on the life of Theodore Roosevelt. It is exciting and action packed, but it is also relaxing. I would recommend this book to people at age ten and up.

Tal K
is a student in
Mrs. Rodgers' Class