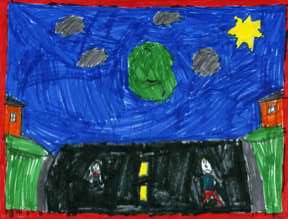 So you think green "goo" is harmless? Think again! I read one of the fantasy fiction Goosebumps books. R.L. Stine titled it Monster Blood. The main character is Evan. Evan and his dog Trigger go to stay with his deaf aunt. Evan's aunt's name is Kathryn. There, Evan meets a girl named Andrea who goes with Evan to an old toy store. At the toy store they buy a can of Monster Blood. Once they take it home it begins to grow. It finally grows out of a bathtub and even swallows two kids.

Like other books I have read, Monster Blood is a mystery book that gives you lots of clues. You try to figure out how it will end as you read along. Aunt Kathryn gives you one clue at the beginning of the story when she says, "Sarabeth is an evil cat." The author gives you clues in each chapter that makes you predict what will happen at the end of the story. Some of the ending I guessed and got right and some of the ending surprised me. My favorite part was when they were running from the Monster Blood because I pictured them running down a straight road from a weird bouncing thing. I think this is a good book because I like to read Goosebumps mystery books I like the mystery in them and I like to solve problems on TV and books. In my mind Trigger to me looks like a dog with a bunch of brown spots on it because that is kind of what I picture most dogs in books with no pictures. This book reminded me about another one I read Monster Blood II because in number II the monster blood grows out of it's can just like in the first one.

I would recommend this book to the class because they are about the same age as us. It is fun to read mystery books and try to guess the ending. This book had a surprise ending that everyone will like. Kids our age will like reading this book since Evan and Andrea are about 10 years old, too. My advice is if you see green "goo" run the other way.