The Biggest Klutz in Fifth Grade

The Biggest Klutz in Fifth Grade 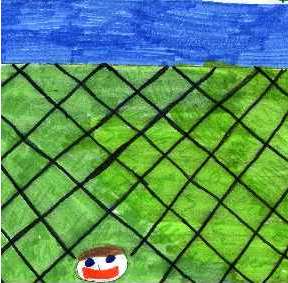 "Ouch! Pat just got stuck under a fence. He was playing football with his friends." I read a book called The Biggest Klutz in Fifth Grade. This book is realistic fiction. Pat is one of the main characters. He has many nicknames because he is a big klutz. Kristine is a popular girl. The Blimp is a chubby girl and goes to camp. The setting is in Doug's backyard. It also happens at school. The problem is that Pat made a bet. The bet is that if Pat gets hurt he might have to kiss the Blimp. Pat is trying to not do anything dangerous but he ends up getting in some dangerous things and he plays with his friends and wears all his gear and pads. A couple days before school Pat goes to the hospital to see if he is hurt. I can't tell you if he gets hurt or not because it's the end of the story. If Pat has to kiss the Blimp it will have to be in front of the whole school.

I know people like Neal because some kids in my class are mean to me and some classmates. I think the lesson was to not have friends that are mean and to not make bets because they get annoying and on your nerves. This author writes very well because he uses lots of details and lots of feelings. This book has no pictures but I think there should be because some parts are confusing and the pictures might help explain.

I would recommend this book to people who like funny books. I recommend it to people who like funny things because this book has lots of funny parts. Like one is when Pat gets stuck under a fence and when the fire department comes to get him out. I think middle school kids would think it's funny because it's about a boy who is under peer pressure starting middle school. Thank goodness Pat gets out from under the fence because he is in pain right now. Find out the other klutzy things that happen in this book.