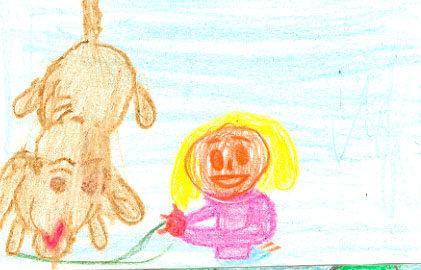 Kim really wants a dog. One night Kim finds a Ghost Dog, Rex. Now Kim has a dog and her parents don't know. Her parents get a dog for Kim but now she has two dogs. One night Rex was barking, it seemed like he was saying good bye. He turned around and ran away. She will never forget the big black Ghost Dog, Rex.

I like when Kim meets Rex the Ghost Dog. Rex then sneeks into the house and Kim doesn't know. Rex is my favorite character because he is a Ghost Dog. I really want a dog just like Kim does. The pictures in this book help to tell the story.

I think others should read this because it is really cool and has good pictures.