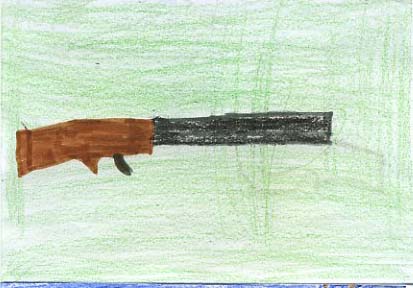 "Bang!" A British soldier goes down. John Byam's rifle was perfect for shooting long distances. The rifle was created by Cornish McManus. After Cornish sold the rifle, he was prosecuted by the British for helping the Americans. Many others who helped the Americans were prosecuted during the Revolutionary War. During this time, only great gunsmiths could make a good rifle like John's. A gunsmith could possibly make one good rifle in their lifetime. This story follows the rifle as it gets bought, sold, traded and lost.

I thought this book was very exciting because it was about the Revolutionary War. My favorite part was when they were in war and they described it so vividly that I could almost feel like I was there. The book reminds me of my life because I shoot also. This book was very special because it reminded me of my grandfather because he loves shooting rifles.

I recommend this book because it takes place during the Revolutionary War and I found this exciting. This story would please all rifle lovers because it is about rifles. Kids ages 8 and up would enjoy this book, especially boys.