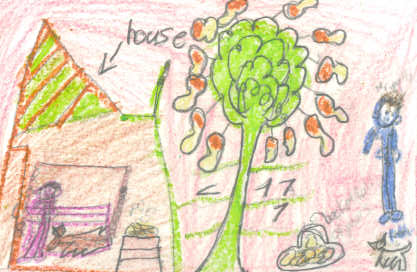 Mr. Putter and his cat Tabby went to their yard to pick out some pears to make pear jelly. Mr. Putter had tomatoes, apples, and pears growing in his yard. He wanted to make pear jelly, but he couldn?t get any pears from his tree! He could not reach the pears. He had a ladder, but he couldn?t climb it because he had cranky knees! So he made a slingshot and he threw apples that had fallen from his tree to the pear tree. He kept on missing, and the apples were all going into his neighbor?s yard! But Mr. Putter?s neighbor, Mrs. Teaberry, came to his yard and said, ?I made an apple feast!? of apple pies, apple cider, apple jelly, and apple turnovers. She gave them to Mr. Putter.

Mr. Putter decided to leave the pears on his tree until they fell down. Then, he would get his slingshot and throw the pears in Mrs. Teaberry?s yard! And then she?d take them and make pear jelly!

I think first grade kids should read this book because it is interesting. The book is a little bit hilarious, and simple. It talks about Mr. Putter and his cat, Tabby. It talks about what they do.

Madalyn C.
is a student in
Page Turners After School Program / Rauschenbusch Center