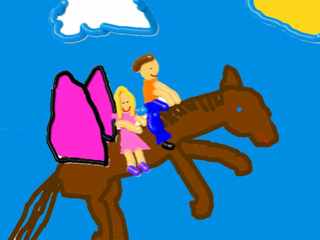 A girl named Polly meets a boy named Digory and they go together through a tunnel. It leads them somewhere unexpected. Digory's Uncle Andrew shows Polly some rings. Polly touches one and it whirls her to another world. Digory follows and together they meet a witch named Jadis. The kids try to get Jadis out of their world and back to hers. The children meet a lion and he sends them on an adventure to find a silver apple. Read the book to find out if they get home in time to save Digory's sick mother.

My favorite part was when the animals tried to plant Uncle Andrew. I thought it was funny. They tried to dig a hole and stick Uncle Andrew in it. Then they tried to water him! I liked this part because it really showed that the animals had never seen a human.

It is part of a series and I think The Lion, The Witch, and The Wardrobe is like this book, because they both meet Aslan. The children also both go on a journey and meet a witch. I think Polly is like my best friend Hannah. I think they're alike because they both like adventures and exploring.

While I was reading this book I felt like I was there with them. I also felt like I wanted to go on my own adventure and be the hero. I thought of alot of predictions during the book and it was fun to see if you where correct. I wonder if Polly and Digory will be in any more books in the series.

I recommend this book to people who like adventure, because they travel through many worlds.