Reviewed by Zac and Dustin (age 7) 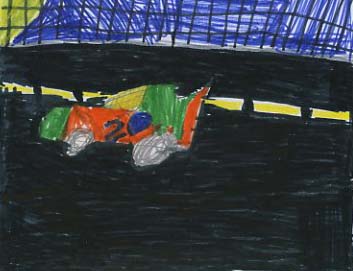 This book is about Nascars and racecars. It is filled with facts about the cars and photographs of races and cars. It takes three and a half hours for cars to race in the Daytona 500. The cars can race up to 200 miles per hour.

I like the photographs in this book because I like to look at race cars. I especially liked the picture of the pileup between cars 1,17,and 59 at the Daytona 500. The cars got smashed and damaged. My favorite driver is Tony Stewart, so I liked the part that told about him winning the cup. The book reminds me of watching Nascar races on television with my family. We are all fans.

I recommend this book to people who like cars because it has great pictures of many different race cars. I think Nascar fans will like this book because it shows engines and many Nascar races.

Zac and Dustin
is a student in
Mrs. Shearer's and Mrs. MacMurdo's 1st and 4th Grades