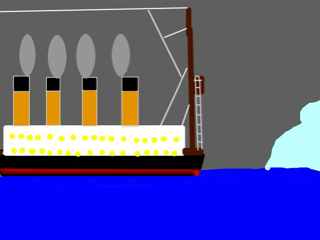 The Eyewitness book, Titanic, explains all about the R.M.S. Titanic on its maiden voyage. The idea to build the Titanic came when Bruce Ismay, chairman of the White Star Line, and Lord William Pierrie, owner of Harland and Wollf shipyard wanted to make a ship that was the best ship ever made. Three ships were built to give three shots at this goal. The first finished was the R.M.S. Olympic, the Titanic's first sister ship. The second that came along was the Titanic. The R.M.S. Titanic was huge. It was 882 feet long which is about four city blocks. If you stood it up [which is impossible] it would be taller than any buildings of her time and would be as tall as the Empire State Building too. It had three classes, 1st, 2nd and 3rd also known as steerage. On April 10th, 1912 she left Southampton, England.

This sea giant sailed smooth until the night of April 14th. At about 11:30 PM in the crow's nest, Fred Fleet, one of 6 lookouts on board, saw an iceberg. A few minutes later the ship turned starboard, too little, too late. The iceberg cut a hole in the side, making many passengers wake up, surprise those that were awake, and allowed water to gush in. The Titanic's end rose up and up as lifeboats were lowered until no more lifeboats were left, but more than 1,500 passengers were left. When crack! The ship snapped in two, but the middle section hadn't fully come off. This still detachment pulled the back straight up. Finally the middle came off, and the ship had vanished at about 02:20 AM. Only 774 were saved. Captain Edward J. Smith, designer Thomas Andrews and over 1,500 were lost. The sunken Royal Mail Steamer was found 74 years later, 2 - miles down.

I liked the book because it is a nonfiction book about the Titanic, which is one of my main interests. Also this book makes it very easy to visualize the R.M.S. Titanic. My favorite part is the pages where it gives a detailed picture of the Titanic; it took four pages! I found many characters neat but one stuck out, his name was Ben Guginhiem. He put on his best suit to die in and he did die in it!