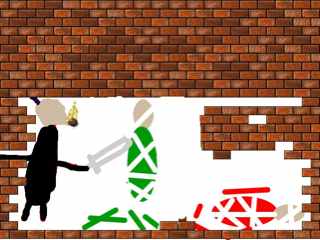 The book, Half Magic, tells about some siblings that find a charm that grants wishes by halves. For instance, when Martha wished she were home then half of her body was half way home and the rest stayed at the movie theater, in the chapter "What Happened To Martha." They have many adventures as they learn to use the charm better. Each chapter is a semi different story because the story and characters are the same, but each chapter is a different adventure.

My favorite part is when Jane wished she belonged to a different family, in the chapter, "What Happened To Jane," because she didn't like Mr. Smith much and everyone else did. Jane's siblings even want Mr. Smith to be their stepfather and this made Jane angry because Jane was the only one of her siblings that could actually remember their father. This book is unique because most books don't use magic like a charm. Usually magic is used like a witch or something. I enjoyed Jane because she is the oldest and was somewhat responsible by letting everyone have a turn using the charm to have one wish.

I would recommend this book to anyone who likes stories about magic or adventures, because the book is mainly about magic and adventures.