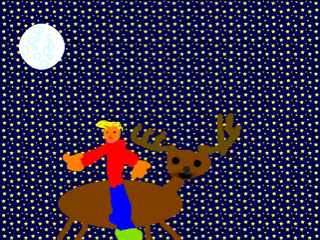 Kringle is a young boy born into a world of goblins. His mother and father die when he is born. He is forced to live with Merwen for most of his life. Then his house is attacked by goblins. He runs to a Roman city. The city has already been attacked by goblins. Kringle goes to the forest. Elves find him. On Kringle's first try delivering shoes (that's what elves do) pirates invade! You'll be surprised at what happens to Kringle and who he becomes, but you'll have to find out for yourself by reading the book!

I really enjoyed Kringle because it was interesting and exciting. One example was when the reindeer saved him and could have been killed. Another example was when the goblin, Morgo, almost caught him. Tony Abbott also wrote the Secrets of Droon series, although Kringle is not part of that series. I read Kringle during the holiday season and found its cover very festive.

I highly recommend Kringle to all readers, adults or children, especially people who want a different look on the Christmas spirit.

Rune B
is a student in
Mrs. Collins' 3rd Grade Class