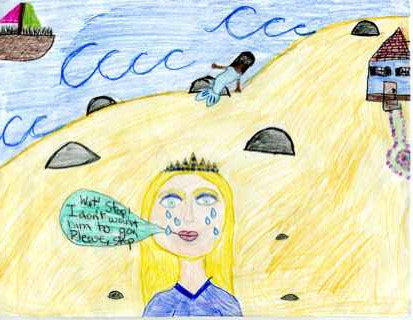 The Secret of Platform 13 is about an island full of creatures you think don't exist. The only way to get there is to go through a Gump (a mound which opens every 9 years for exactly 9 days) underneath Platform 13 in London. On the island, the king and queen are human and when the queen has a baby boy, a lot of creatures want to be the nurse. The queen doesn't want too much magic to be around her boy, so the nurses she picks are human triplets named Lily, Violet and Rose. Soon the opening of the Gump comes and the triplets get homesick. So they take the baby to London for a little while. In London, the baby gets stolen! The nurses don't have enough time to save the prince.

Nine years later, it is time for the Gump to open again and the king and queen have chosen the rescuers. They are a hag named Odge, a fey named Gurkie, a giant named Hans and a wizard named Cor. At London, the rescuers meet a young boy. The boy helps them. Surprisingly the young prince doesn't want to come back to the wonderful island! The rescuers and the boy make a plan to bring back the prince. At the last moment, the rescuers find out that they had made a big mix-up! Will they be able to bring back the real prince before the Gump closes?

My opinion of this book is that it is good, it made me laugh a lot. The language the author uses makes a wonderful picture. I felt I was one of the characters! My favorite character is Odge the hag. This is because her point of veiw and my point of view are somewhat alike. Also she is very humorous. My favorite part was when the prince is eating ice cream, Odge uses her magic to drop the ice cream all over the prince, because her first look impression of him was horrible. You would think that he got better, but he didn't change.

I recommend this book to kids who like humorous stories, because this story is very funny. Also if you like to read about magic creatures, this is the book you want. It's not only funny, but very interesting too. Once you start reading it, you can't stop. You are absorbed in a new, magical world.

Samiha M
is a student in
Mrs. Appell's 4th and 5th Grade Class