Reviewed by Mallory B (age 9) 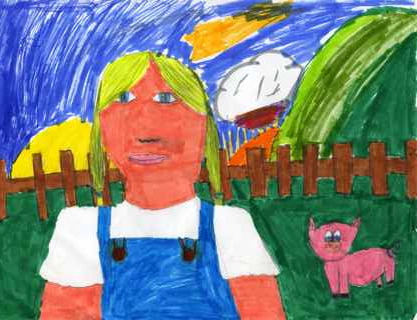 Wishes, Kisses, and Pigs is about a girl named Louise who wishes on a star that her brother is a pig. This book is mostly about Louise having lots of trouble with a wishing star.

One lesson almost everyone learns is that you have to be careful what you wish for, because Louise is wishing about pigs and her brother turns into one! On Louise's second wish she turns her pig into a human! (She thought the star knew what she meant when she said that she wanted the pig to become human.) My favorite part in the book is when Louise wishes her brother was a pig and he turns in to one!

The main character Louise reminds me of my friend Alexa because they are both very funny, like outdoors, and love animals. This whole book is about Louise making a mistake and trying to fix it. Her father is gone and her Mother is trying to NOT marry the two brothers Tom & Tod. One example of this happening is when they both come to Louise and her Mother's house and try to convince her to marry one of them. Molly Cow is a good friend of Louise's; one she can talk to and trust. The only other animal besides the pigs and Molly Cow is the Hooting Owl that reminds everyone of Louise's father.

This is a very good interesting book, and is good for young adult and advanced readers. I recommend young children NOT to read this book because it has lots of adult language, adult humor, and romance.

Mallory B
is a student in
Mrs. Appell's Class