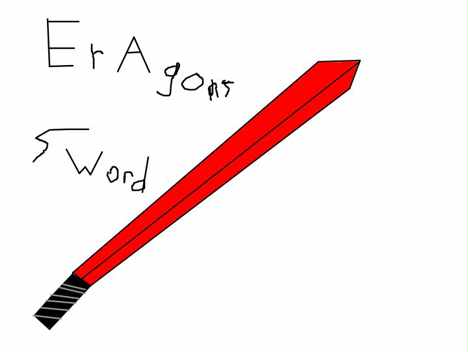 Eragon is a book of excitement, adventure and thrills. The book is mainly about a boy named Eragon and how he finds a dragon egg. Eventually the ruthless Empire, run by Galbatorix, sends the fierce and very dangerous Razack after him. Through his travels Eragon meets many characters like Brom, the town storyteller, and a rider, Orik. Eragon is a dwarf and the adopted son of the dwarven king Hrothgar, and Murtagh, the son of Morzan Galbatorix's servant. He ran away after his father died when he saw the king's plans of evil. At first when Eragon's dragon egg hatches it is only as big as his hand, but it grows at an alarming rate. He names his dragon Saphira and bonds closely with her becoming a rider and learning to wield a sword.

While reading this book I thought it was very descriptive, so I could picture it in my mind. Also this book is emotional and filled with action. My favorite action part of this book is when Eragon is fighting the shade Durza because it shows how strong Eragon has become. The emotional parts of this book are very strong and about war so it would not be suited for younger readers.

Overall I thought this book was great. The people I think would like this book are age group 4th grade and up. Also people who like Star Wars, Lord of the Rings and The Phantom Tollbooth will absolutely love this book.

Daniel W
is a student in
Mrs. Appell's 4th and 5th Grade Class